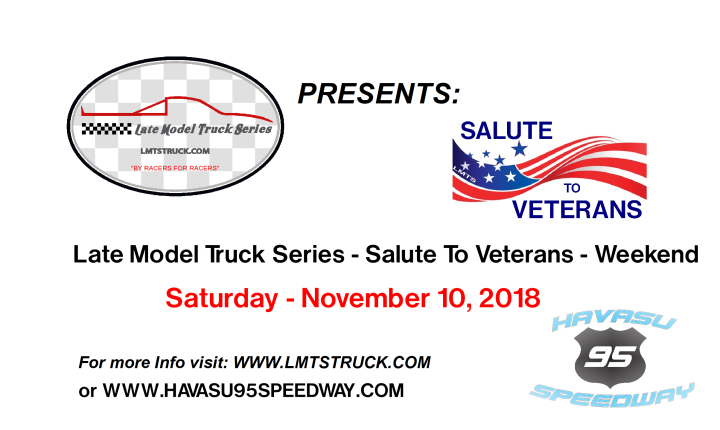 LAS VEGAS – Mark Allison will be looking to put the finishing touches on a championship on Saturday night.

The veteran driver from Las Vegas heads to Havasu 95 Speedway in Lake Havasu City, Ariz., atop the Late Model Truck Series standings with 180 points, followed by series co-managers Gary Wyatt (172) and Michael Riefler (169). The season-ending event is part of the Late Model Truck Series’ Salute To Veterans Weekend and will include two six-lap heat races and a 35-lap feature.

The race winner will receive a product certificate toward Richmond Gear discounts along with the payout, and the top five finishers will take home The Racer’s Rewards Contingency Connection coupon books with up to $3,000 in race product coupons. Racing starts at 6 p.m. PT and also will feature Vintage Sprints & Midgets, Legends, Bandoleros and Outlaw Karts.

“It has been a great season for the Late Model Truck Series, and Gary Wyatt and I are excited to see our champion crowned this weekend,” Riefler said. “We have had some talented race winners, with Thane Alderman, Dustin Ash and Mark Allison going to Victory Lane, and we can’t wait to see who will be next at such a prestigious race track as Havasu 95 Speedway.”

Alderman was victorious at the season-opening event at The Bullring at Las Vegas Motor Speedway on Aug. 25, with Ash winning in Las Vegas on Sept. 22 and Allison taking the checkered flag at The Speedway at Willow Springs in Rosamond, Calif., on Oct. 13.

Havasu 95 Speedway opened in 1989 and ran for seven years before being closed. Paved and re-opened in March of 1996, the track again closed before 2000. It re-opened in September 2006 under the direction of Bill Rozhon and his family and has been running strong ever since.