These Trucks from the southwest region have a long history in short track racing. The Speed Truck series originated back in 1997, under the American Speed Association (ASA.) At one time, MechanixWear gloves sponsored the class.

As a touring series, the Trucks raced up to 10 different tracks in one season, traveling through California, Arizona, and Nevada.

The Trucks go to local tracks. ranging from small 1/4-mile tracks to big 1/2-mile ovals, along with 1.7 and 2.1-mile road courses. Although the ASA Truck series disbanded in 2013, the remaining Trucks are regrouping and  race as the Late Model Truck Series. 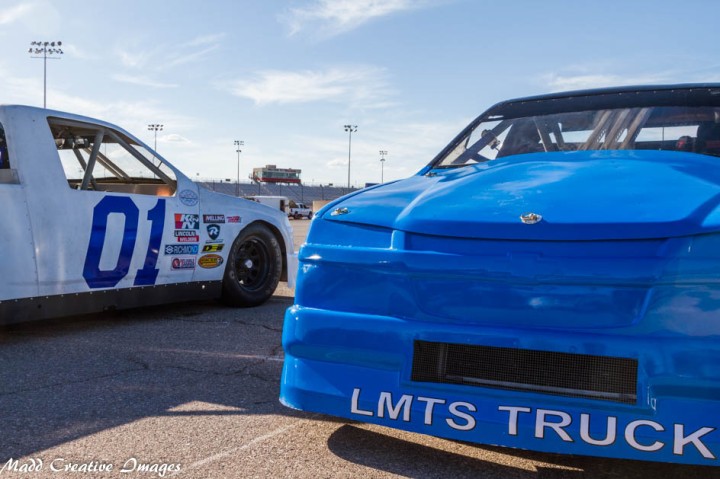 What’s our goal for Sponsors?

High visibility to crowds, increased exposure through word-of-mouth and association with the sport, driver appearances at promo events, brand loyalty from fans, and a way to display yourself to the local community through racing. All of this is your return on investment.

Also, the race truck isn’t only a billboard. Our drivers act as a spokesman for your product, endorsing it and mentioning it whenever possible – like after winning a race.

The goal for both of us is to reach more people.

We Partner with The OnWheelsNow.com Show which Host the longest running Local Motorsports Radio show in Las Vegas Broadcasting Internationally via the world wide web.

What are LMTS trucks?

They have a two-speed direct drive transmission, with a clutch pedal dump valve coupled to an aluminum quick-change rear end.

The trucks sport replica fiberglass bodies of the Chevrolet S-10, Chevrolet Colorado, Dodge Dakota, Ford Ranger and Toyota Tacoma. Speeds can reach up to 150-mph at some of the larger tracks.

Additional information on the series and trucks can be found here or by emailing mike@lmtstruck.com